Promoting and developing social skills among Secondary (high school) students is imperative, in particular while learning a second language.  Through collaboration Jennifer Salas, an OCDE Project GLAD® trainer and a Teacher On Special Assignment (TOSA) at the High School level, and Brenda Ochoa, who teaches Spanish I-AP in Orange Unified School District, are  making this happen! Jennifer provides professional learning in core subjects and language development in the Orange Unified School District in California. She also has the privilege to work alongside wonderful educators, such as Brenda Ochoa,  who teaches Spanish Level 1-AP Spanish courses at Villa Park High School. In collaboration with the National Training Center, we have not only focused on the academics, but on the social- emotional aspects in her classroom. Ms. Ochoa decided to implement the T-Graph and Team points in her Spanish classes, to create positive environments, while promoting the second language (in this case, Spanish).

The T-Graph strategy has been a great resource to promote social skills with Secondary students learning Spanish.This strategy has given students the opportunity to feel safe and be empathetic towards each other, while also engaging in academic conversations.  The picture below shows a sample of how Interdependencia (Interdependency in English) was promoted in Mrs. Ocha’s classroom.

One of the variations of this strategy, used in the high school setting, is inviting students  to write their ideas onto the chart. Students work in teams,negotiating for meaning. Then, through utilizing numbered spoons,  one member of each team is invited to the chart to write down their team’s idea. Having students write their responses on the chart creates  a positive environment and promotes student ownership. Having students speak in the target language and share with peers, gives students the opportunity to make sense of not only the ideas, but also of the language grammatical forms and functions. Once their team agrees, they also become a support to change  the spoken ideas into writing. Points are also added onto the chart to reinforce “interdependencia” and to create a fun engaging environment as teams collaborate and support each other. The participation rose tremendously as well; it was a pleasure to see how the class demonstrated respect to each other.

As a result, the teacher has expressed seeing her students speaking more in the target language, feeling more comfortable in making mistakes not only in mispronouncing or spelling, and  not feeling judged or criticized by peers. On another note, the Ms. Ochoa has observed students who were in the silent period( the silent period (also called pre-production period) is a phase reported to have been observed in second-language acquisition where the learner does not yet produce language, but is actively processing the L2 (second language))  start producing the Spanish language and communicate with her and the rest of the class with more ease.

Share This Post
Have your say!
10
Previous ArticleTrainer Need to Know: iStoreNext ArticleEarly Childhood/Preschool GLAD®: Engaging Preschoolers at Home in Fun Ways
You May Also Like 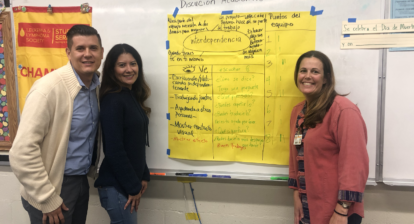